Back in the early 2000s I worked for a Taiwanese company (Acer) and travelled reasonably frequently to Taiwan. At the time I blogged a little on a site called H2G2 – the Hitchhiker’s Guide to the Galaxy: Earth Edition – inspired by the late, great Douglas Adams. The following is a post I made about my experiences in Taipei – specifically with the chaotic traffic in Taipei[1].

As I work for a Taiwanese company (Acer Computer), I have the pleasure of visiting Taipei once or twice a year. Each time I go there I have to remind myself of some of the subtle differences between Eastern and Western cultures – such as the traffic. It constantly amazes me that in all the visits I have made to Taiwan, I have only seen a small number of minor traffic accidents.

This amazes me simply because the traffic there can only be described as chaotic.

An interesting phenomenon is that most intersections have a series of white lines painted on the road, parallel to the kerb, and extending from one side of the road to the other. They look suspiciously like the lines we’d call a pedestrian crossing, only they must mean something else. Probably something like “objects bigger and made of larger quantities of metal have right of way”.

Line markings on the roads themselves are also unique. In Australia, we generally separate lanes using lines to mark out the lanes. In Taiwan its just a little different. The road between the lines is certainly considered a lane, but the lines themselves also appear to be a lane. Magically, the Taiwanese seem to get 5 traffic lanes into a space we would get three.

The centre lines between traffic can be interesting too. Traffic from both directions seem equally able to take advantage of this zone.

Changing lanes can be an adventure in itself, especially if you are in the middle and need to turn a corner.

Learner-drivers in the west are generally advised to leave at least 2–3 car lengths from the car in front. Few of us are perfect in sticking strictly to this rule, but in Taiwan leaving such space would cause only a moments confusion. Then, 2–3 cars from the next lane would quickly fill the space, as well as 2–3 of the cars riding in between lanes.

This is bad enough, but if you happen to be in the middle lane of three, this would mean that 8–12 cars would be jostling into the spots.

And then there’s the scooters……

The scooters seem to have the right to fill in any space that the driver of another vehicle seems to have left unused. Somehow the earlier rule of right of way does not seem to apply.

I have worked out the traffic out system in Taipei. Its actually really quite simple – the laws of physics have been waived so that the laws of traffic can be waived accordingly. This means that when 9–12 cars, plus a couple of dozen scooters converge on a single lane, they get away with it because there is an anomaly that allows multiple material objects to occupy the same point in the space/time continuum.

There is simply no other explanation. 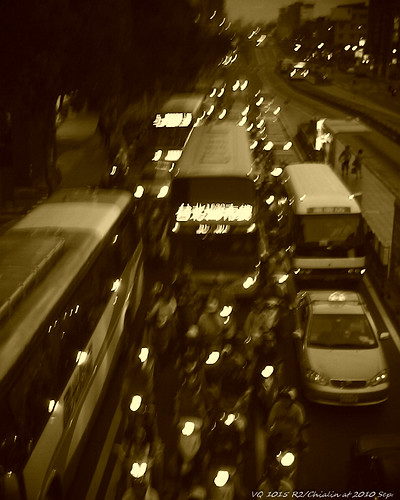 One thought on “Taipei Traffic”