In a thought-provoking post called Friction and silo dead-ends Manton Reece discusses the importance of friction in reducing fake news:

I believe in a middle-ground solution. Make it easier to post to your blog.

But don’t make thoughtless re-sharing completely frictionless. That’s what leads to fake news spreading, why hateful tweets are exposed in algorithmic trends, and why safe communities must have some amount of curation.

A while back I posted about mindful blogging and discussed the importance of putting thought into posts:

Clicking a link to Like or Favourite favourite takes a single second, and even less thought. People do it routinely, move on and often give no more thought whatsoever to the topic.

I think Manton is right – blogging should be easy, but should still require more thought that reading a headline, clicking like or share and moving on. 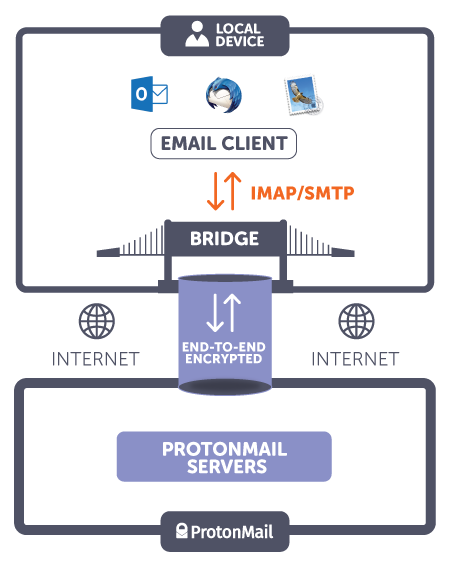 ProtonMail Bridge is an application that allows you to use your ProtonMail encrypted email account with your favorite desktop email client such as Thunderbird, Apple Mail, or Outlook, while simultaneously retaining the zero-access encryption and end-to-end encryption that ProtonMail provides.

So we’ve been living in Darwin for about six months now, and are coming to the end of our first wet season. It has, apparently, been one of the least wet wet seasons on record, but there have still been some pretty interesting storms come through.

Here’s a timelapse video of a storm as seen from our balcony this evening.

From the first teaser I have been excited about Star Wars – The Force Awakens.

Today Belinda discovered that a new trailer with previously unseen footage has been released. Only trouble is that it is a Japanese trailer, and takes a couple of extra steps to find. So, here it is.

A return to Australia

My posting has been a little light on here over the past few months, but I have a good excuse — I’ve been deployed as part of my Navy duties for five months on a journey that has taken us to some ten nations on three continents (not including Australia).

I am a Public Affairs Officer (PAO) in the Royal Australian Navy, and since late last year I have been the embarked PAO in the helicopter frigate HMAS Anzac for NORTHERN TRIDENT 2015 (NT15).

NT15 had several key aspects – commemoration of the Centenary of Anzac, international engagement and interoperability with international navies.

It was a very busy and successful deployment, and was one which allowed us to visit some amazing places, including Greece, Turkey, Italy, Malta, the United Kingdom, France, Spain, Morocco, South Africa and Mauritius. I personally really loved Malta in particular, with Mauritius, the UK, Crete and Cape Town being great visits also.

The above video, shot by our embarked Imagery Specialist, supported by colleagues ashore and compiled by Defence Multimedia, tells a short story of our return to Sydney last Saturday (8 August 2015).

Now that I am back, I look forward to getting back into posting my personal photos, and posting about photography and diving.

Ello founder Paul Budnitz provides a beautiful description of what Ello is – why it is not Facebook. Or any other social network. It is simply Ello.

I like Ello for its simplicity and the fact that it is genuinely focused on providing a creative outlet. The lack of ‘Likes’ and ‘+1s’ means that people give actual feedback (comments) or nothing at all. And the actual comments are more likely to be balanced.

If you want creative feedbck, give Ello a go. Let me know if you need an invitation.

All the sounds in the performance were made on the artist’s iPad, again showing that the iPad is a superb device for creating as well as consuming content.

Over the past few months I have started drafting a number of posts that I have yet to complete.

I setup the Around the Web link blog on Pinboard as a place to track links of interest, with the idea being that I could have short comments. These, in theory, get rolled up into regular Around the Web posts. For several reasons – some technical, some personal – this process has been a little broken.

The idea was that these would fill a gap between Twitter posts and longer form posts, which would become the focus of writing here. I think this gap is too great.

Apparently I am not the only one, with people like Andy Baio, Gina Trapani and Jason Snell deciding that their blogs will be for anything longer than a tweet, even if it is only a paragraph or two. Of course people like John Gruber have taken that approach all along.

So, this blog will probably have more regular, short form comment. Some posts might be quick thoughts while others might be expanded links. Of course, the occasional long form post and semi-regular Photos of the Week will continue.

I hope this will become a better middle ground of posting for me.

A great article today on The Conversation about shark bite statistics and policy.

A cursory glance at statistics can lead to fear and a perception that shark attacks are on the rise. This can lead to bad policy, such as the shark cull in Western Australia, with the acting Premier Kim Hames vocalising the policy

So the numbers have significantly increased in the last three years and we believe the Government had to do something about it.

But the reality is that a shark attack is, mathematically, random chance. As stated by Christopher Neff in The Conversation article, there are an enormous number of human-shark interactions (most of which the humans remain blissfully unaware of) that are never counted:

The coin is tossed all the time, but we only count the tragedies.

As someone who spends a lot of time in, on and arond the ocean, I have knowingly had many encounters with sharks. Only once was I aware of a shark being uncomfortable with my presence. I moved away.

Shark attacks are undoubtedly horrific events when they occur. But so are car accidents. Car accidents, however, are far more frequent[1] and are far less random in their occurence.

Navy clearance diver and shark attack survivor, Paul de Gelder, has posted a great response to the WA Shark Cull. He makes a passionate case against the cull, but I think his conclusion says it all:

The ocean is not our back yard swimming pool and we shouldn’t expect it to be one. It’s a wondrous, beautiful, dangerous place that provides our planet with all life. It and it’s inhabitants need protection from those that would do it harm.

Killing sharks as a blanket policy is a knee-jerk reaction, and is bad policy. Doing it based on poor interpretation of random chance is short-sighted.

By way of The Loop comes a fantastic horror scene set up at a coffee shop.

Six months ago I moved DesParoz.com over to SquareSpace, specifically SquareSpace 6. Today I am moving it back to a self-hosted WordPress installation.

With WordPress, I can write and publish directly from Byword – both Byword for iOS and Byword for Mac. On SquareSpace, I would have to write in the editor, then copy the HTML, then paste it into the SquareSpace website (or app). It was simply too many steps for my liking.

Frictionless workflows are important, so after considering this change for a while I made the decision to switch back. Frankly my life is likely to be even more on the go in the forseeable future. The ability to write and post on the go is critical. So while I lose some of the powerful features of SquareSpace, I gain the flexibility of WordPress and Byword.

My workflows are based on the front-end apps I choose to use on a daily basis. Backend systems, whilst important, should be chosen based on how well they support workflows and apps.